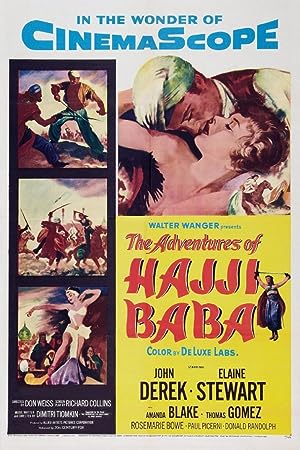 Summary: In Ispahan, Persia, Hajji Baba is leaving his father’s shop to seek a greater fortune, while the Princess Fawzia is trying to talk her father, the Caliph into giving her in marriage to Nur-El-Din, a rival prince known far and wide as mean and fickle. Her father intends Fawzia for Fawzia to marry a friend and ally, and makes plans to send her to him. But a courier brings word from Nur-El-Din that an escort awaits Fawzia on the outskirts of the city and she escapes the palace disguised as a boy. Hajji encounters the escort-warrior at the rendezvous spot, is attacked and beats up the escort with his barber’s tools. The princess arrives and mistakes Hajji as the escort until he mistakes the emerald ring sent by Nur-El-Din to Fawzia as the prize to be delivered. In her efforts to escape him, her turban becomes unbound and Hajji realizes that the girl herself is the treasure Nur-El-Din awaits. Hajji promises to escort her and they spend the night with the caravan of Osman Aga, who invites them to stay for the dancing girls, among them, the incomparable Ayesha. The pair are overtaken by the Caliph’s guards sent to bring Fawzia back, but the guards are driven off by an invading army of Turcoman women, a band of fierce and beautiful women who prey on passing merchants.