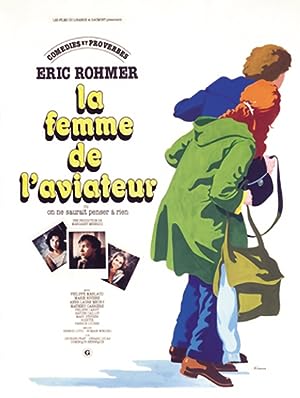 Summary: The aviator Christian visits his ex-mistress Anne seven o’clock in the morning, to tell her that their affair is over, because his wife is pregnant and will soon move to Paris. Anne’s new lover, François, happens to see Christian and Anne when they leave her house, and thinks that their affair is still going on. He tries to contact Anne, but she won’t talk to him. At a pavement café François sees Christian and an unknown woman, which he assumes is the aviator’s wife. As he is in a bad mood and doesn’t know what to do, he decides to follow the couple. On his way through a park he bumps into a cute girl, Lucie, who is 15 years old and has taken a day off from school. Lucie soon brings 20-year-old François to explain to her what has happened to him this morning. She is excited by his story and especially the puzzling parts of it. She joins him in pursuing the couple and thinks out various hypotheses about them. When the couple goes into a lawyer’s office, Lucie is sure that the unknown woman is the aviator’s wife and that they are seeking a divorce. Later, when François visits Anne he learns that the unknown woman is actually not the aviator’s wife but his sister. Anne also confirms that her affair with the aviator is over. When François is going to send Lucie a postcard about this, he happens to see Lucie kissing a boy, which makes him dispirited, as this boy happens to be François’ friend and work colleague that he sees every day.