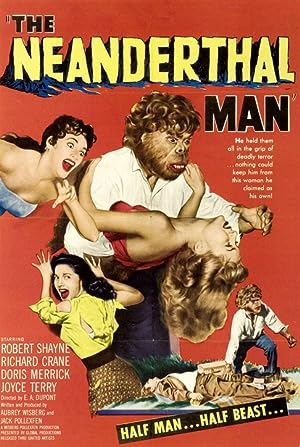 Summary: Wheeler, a tourist-hunter in the California High Sierras, is not believed by the patrons of Webb’s Cafe when he claims to have run across a live tiger with tusks. Among the scoffers is game-warden Oakes – until he is driving home later that night and the critter hops on the hood of his car. Oakes convinces a skeptical Dr. Harkness, state university zoologist, to come to the small town to investigate. At Webbs’, Harkness meets Ruth, fiancée of Prof. Groves who maintains his home and lab outside the town, and thru her meets Groves’ daughter, Jan. Groves himself is down in the city, angrily trying to convince the Naturalists’ Society of the truth of his theory that the size of skull and brain equate with intelligence, and therefore Neanderthal man was equal, if not superior, to Homo sapiens. He is rejected, and by the time he returns home, seems completely unhinged, rejecting his fiancée and secluding himself in his lab. There, he has developed a serum with which he is experimenting. After Harkness and Oakes kill the tiger – indeed, a sabre-toothed tiger, which vanishes when they go to Groves’ for help retrieving the body – they begin hearing of a grotesque humanoid in torn clothing, which has killed a couple of local men and assaulted Nola, Webbs’ waitress; and join the Sheriff in attempting to solve this new mystery, which is clearly connected to Groves’ experiments…