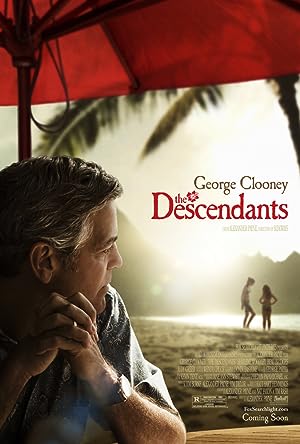 Summary: Matt King’s family has lived in Hawaii for generations. His extended family – namely he and his many cousins – own 25,000 acres of undeveloped land on Kauai held in trust, which ends in seven years. The easiest thing for the family to do is sell the land before the seven years is up, which is all the talk in the state, as, to whom they sell the property could very well change the face of Kauai. Despite the vast wealth that comes with the land, Matt has decided to live solely on what he earns as a Honolulu lawyer. However, Matt has not had a perfect life living in Hawaiian paradise as many believe. He and his wife Elizabeth were having problems in their marriage. She recently got into a boating accident which has placed her in a coma. Their seventeen year old daughter Alex is in boarding school on the big island since they couldn’t handle her rebellion, which was made all the worse by an argument of an unknown nature between mother and daughter during Alex’s last visit home. And their ten year old daughter Scottie is starting to act out, which Matt doesn’t know if he can handle, potentially raising her on his own. Matt decides to bring Alex home upon news that Elizabeth is brain dead, and that she will be pulled off life support. But revelations about Elizabeth and Alex’s argument, which is tied indirectly to the issue of the land sale, leads to some decisions on Matt’s part about what is best for him in both mourning Elizabeth’s death and what is the best thing to do about the land, the two decisions which may be incompatible.