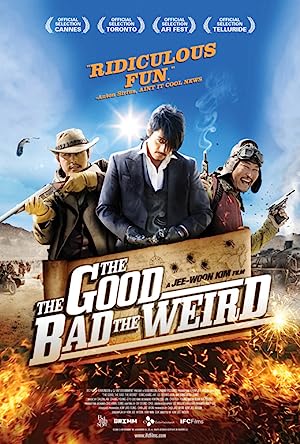 Summary: A guksu western. Three Korean gunslingers are in Manchuria circa World War II: Do-wan, an upright bounty hunter, Chang-yi, a thin-skinned and ruthless killer, and Tae-goo, a train robber with nine lives. Tae-goo finds a map he’s convinced leads to buried treasure; Chang-yi wants it as well for less clear reasons. Do-wan tracks the map knowing it will bring him to Chang-yi, Tae-goo, and reward money. Occupying Japanese forces and their Manchurian collaborators also want the map, as does the Ghost Market Gang who hangs out at a thieves’ bazaar. These enemies cross paths frequently and dead bodies pile up. Will anyone find the map’s destination and survive to tell the tale?