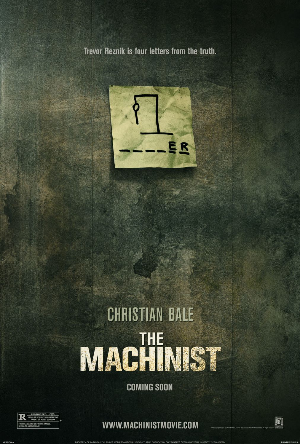 Summary: Trevor Reznik is a machinist in a factory. An extreme case of insomnia has led to him not sleeping in a year, and his body withering away to almost nothing. He has an obsessive compulsion to write himself reminder notes and keep track of his dwindling weight, both scribbled on yellow stickies in his apartment. The only person he lets into his life in an emotional sense is Stevie, a prostitute, although he has an infatuation with Maria, a single mother waitress working in an airport diner. His co-workers don’t associate with and mistrust him because of not knowing what is going on in his life that has led to his emaciated physical appearance.