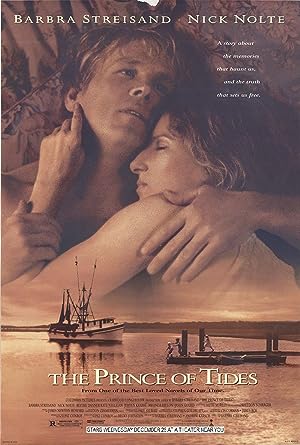 Summary: The Wingo family is from South Carolina, they growing up in a house on a tidal plain. The oldest offspring, Lucas, largely acted as the protector for his younger twins siblings, Tom and Savannah, in light of their dysfunctional growing up, with their shrimper father, Henry, distant and abusive if/when he did pay them any attention, and their mother, Lila, while not doting on them most concerned about appearances and striving for social standing. Now in middle age, Savannah is a New York based poet, Tom, still living on the South Carolina coast outside of Charleston with his wife Sally and their own three doting daughters, taking a break from his high school teaching/football coaching job, while Lucas has long since died while still standing up for himself and his beliefs. Lila, divorced and now remarried with that wealth and social standing she so long desired, receives news that Savannah is in the hospital following her most recent suicide attempt. Not wanting to face the blame directly as she suspects, she assigns Tom to go to New York to speak to Savannah’s therapist, Susan Loewenstein, to provide any information of a family history nature that could help in Savannah’s recovery. Tom agrees despite hating New York, and it being not a good time since he and Sally are experiencing marital problems, they both just knowing that things between them are not working, and not having been intimate in months. As Tom and Loewenstein (as he calls her) begin their sessions, Tom is slow to divulge the Wingo family problems to her. But he learns that she too is having her own family problems, with her concert violinist husband Herbert Woodruff being self absorbed and condescending, with their young adult son, Bernard, hating both largely because of they predestining his life also as a concert violinist. Tom and Loewenstein’s sessions blossom into a friendship and romance, where their talks, in addition to helping Savannah, may help them both in dealing with their own life problems, Tom’s which have been long buried figuratively and literally.