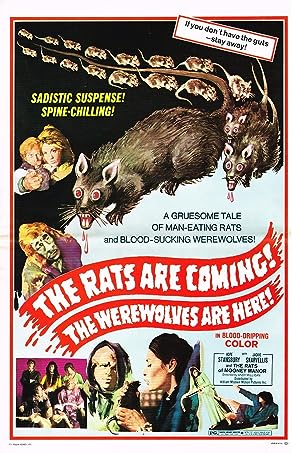 Summary: The Mooneys are an eccentric English family whom live in a large house in rural England in the early 1900s. The invalid patriarch ‘Pa’ Mooney (Douglas Phair) is a retired medical doctor who claims to be 199 years old. His eldest daughter, Phoebe (Joan Ogden), more or less cares for him and is head of running the household. His eldest son, Mortimer (Noel Collins), is a businessman whom conducts the finances of the family and contributes to the family income. Younger daughter Monica (Hope Stansbury) is a sadist who keeps live rats as pets and frequently mutilates them and other small animals. Youngest son Malcolm (Berwick Kaler) is a half-wit with animal tendencies in which the family keeps him locked up in a room of the house with live chickens. The family has a secret: they are all werewolves! They are natural born, not made, werewolves whom turn once a month on the night of the full moon and Pa Mooney has been researching for years to find a way to break the family curse. Youngest daughter Diana (Jackie Skarvellis) returns home from medical school with a new husband, a former classmate named Gerald (Ian Innes), which Pa Mooney heartily disapproves of. Pa tells Diana that she is the last hope that the family has to overcome the ancient curse since she is the only member of the family who does not turn into a werewolf on the night of the full moon. Will Diana succeed? However, Diana is revealed to have other plans.