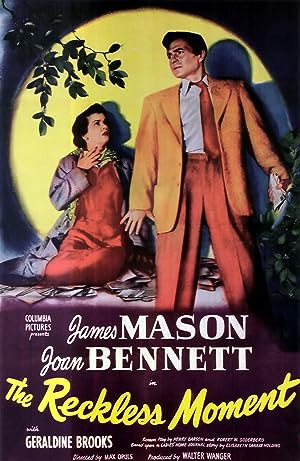 Summary: In the charming community of Balboa 50 miles from Los Angeles, middle-class housewife Lucia Harper travels to Los Angeles to meet scoundrel, Ted Darby. Her seventeen year-old daughter Beatrice is in love with Ted. He asks for money to leave Bea, but Lucia refuses to give any. Bea does not believe her mother when told and during the night she sneaks out to the boat garage to meet Ted who admits that Lucia told the truth. Bea pushes him and Ted falls to his on an anchor. The next morning, Lucia finds the body and assumes that Bea has killed her lover. She decides to get rid of the corpse and puts it in her boat and dumps it far from home. When the police find Ted, a stranger, Martin Donnelly, visits Lucia to blackmail her on behalf of his partner, Nagel who has several letters Bea had written to Ted. Donnelly wants $5000 for the letters. The desperate Lucia tries to raise the amount. Martin falls in love with Lucia and tries to help her too. The dangerous Nagel wants to receive the amount at any price.