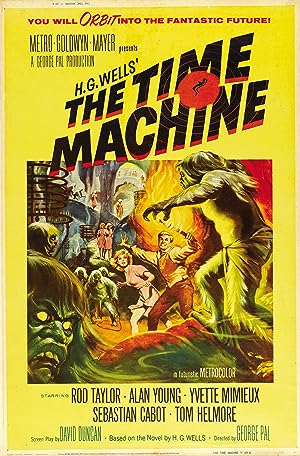 Summary: On January 5, 1900, a disheveled looking H.G. Wells – George to his friends – arrives late to his own dinner party. He tells his guests of his travels in his time machine, the work about which his friends knew. They were also unbelieving, and skeptical of any practical use if it did indeed work. George knew that his machine was stationary in geographic position, but he did not account for changes in what happens over time to that location. He also learns that the machine is not impervious and he is not immune to those who do not understand him or the machine’s purpose. George tells his friends that he did not find the Utopian society he so wished had developed. He mentions specifically a civilization several thousand years into the future which consists of the subterranean morlocks and the surface dwelling eloi, who on first glance lead a carefree life. Despite all these issues, love can still bloom over the spread of millennia.