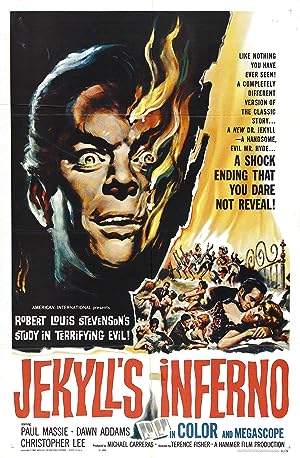 Summary: Dr. Henry Jekyll is a dull, bookish scientist who spends more time with his lab animals testing theories of alternate personalities than with his beautiful, young wife. Kitty Jekyll has given up trying to find any passion in her distant, preoccupied husband and is involved in an affair with one of Jekyll’s old ‘friends,’ Paul Allen, a weak slacker and wastrel who relies on Jekyll to pay his numerous gambling debts. After experimenting on himself, the bearded, tweedy Jekyll transforms himself into the young, dynamic, and self-confidant Edward Hyde. In his new character he befriends Allen, who has no idea that this clean-cut, handsome playboy prone to outbursts of violence is really Jekyll. As Hyde, he encourages Allen to introduce him to the dark underbelly of London’s night life including opium dens and sex clubs, where he begins an affair with the sensual courtesan Maria, an exotic dancer and snake charmer. When he tries to seduce Allen’s mistress, in reality his own wife, he is frustrated to find she prefers her decadent lover to him.