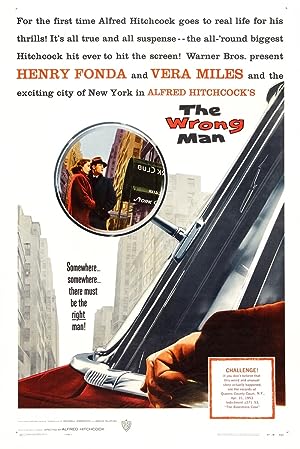 Summary: Christopher Emmanuel Balestrero – Manny to his friends – is a string bassist, a devoted husband and father, and a practicing Catholic. His $85 a week gig playing in the jazz combo at the Stork Club is barely enough to make ends meet. The Balestreros’ lives will become a little more difficult with the major dental bills his wife Rose will be incurring. As such, Manny decides to see if he can borrow off of Rose’s life insurance policy. But when he enters the insurance office, he is identified by some of the clerks as the man that held up the office twice a few months earlier. Manny cooperates with the police as he has nothing to hide. Manny learns that he is a suspect in not only those hold ups, but a series of other hold ups in the same Jackson Heights neighborhood in New York City where they live. The more that Manny cooperates, the more guilty he appears to the police. With the help of Frank O’Connor, the attorney that they hire, they try to prove Manny’s innocence. Regardless of if they manage to prove Manny’s innocence or find the actual hold-up man, the situation may cause irreparable damage on the Balestreros.