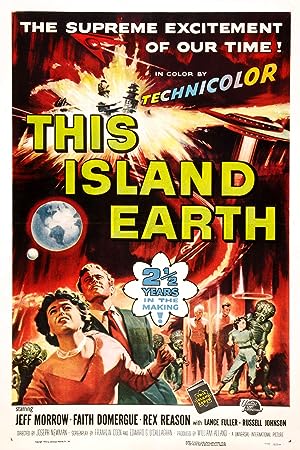 Summary: The electronic engineer Dr. Cal Meacham is a prominent scientist that is studying industrial application of nuclear energy and also a great pilot. One day, he receives a different condenser and soon his assistant Joe Wilson receives a manual instruction and several components of a sophisticated machine. Carl and Joe build a communication apparatus and a man called Exeter contacts Carl. He tells that Carl has passed the test assembling the Interocitor and invites him to join his research. The intrigued Carl decides to travel to meet Exeter that sends an unmanned airplane to bring him to an isolated facility in Georgia. He is welcomed by Dr. Ruth Adams but she mysteriously does not recall their love affair in the past. They team-up with Dr. Steve Carlson and they note that the other scientists in the facility have been transformed, having a weird behavior. They decide to flee in a car, but they are attacked by rays and Steve dies. Carl and Ruth also witness the facility blowing-up and they escape in an airplane. However they are pulled up into a flying saucer and realize that Exeter is an alien. Whal is the objective of the aliens?