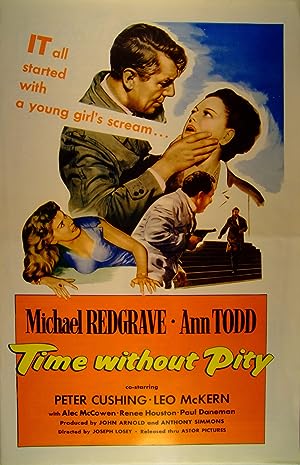 Summary: Alec Graham is sentenced to death for the murder of his girlfriend Jennie, with whom he spent a weekend at the English country home of the parents of his friend Brian Stanford. Alec’s father, David Graham, a not-so-successful writer and alcoholic who has neglected his son in the past, flies in from Canada to visit his son on death row. Alec repudiates his father’s attempts for a final reconciliation. David Graham, convinced of his son’s innocence and, despite his preoccupation with himself and his own alcoholism, mounts a last-ditch effort to find the true murderer in the 24 hours remaining until the planned execution. Graham encounters the wealthy and famous car manufacturer Robert Stanford, tyrant at home and in the office and an apparent womanizer, Stanford’s young, curiously troubled wife Honar, their ill-at- ease son Brian, himself disturbed by his parents’ relationship, and Vicky Harker, a young, brainless secretary at Stanford’s factory who has been climbing up the career ladder at a rapid pace lately…