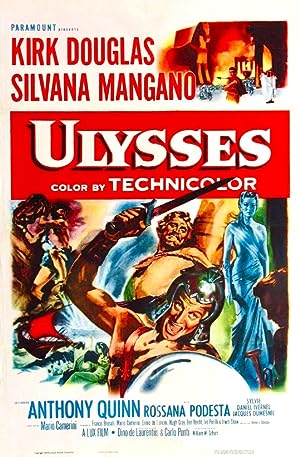 Summary: In the ancient Greek city of Ithaca, many impatiently await the return of their king Ulysses and his warriors from the Trojan War. Among these, Ulysses’ devoted wife Penelope and his grown son Telemachus. But Ulysses’ return is not eagerly awaited by everyone, especially by his enemies. They openly court Penelope and ask her to give her husband up for dead and re-marry one of the rowdy suitors who have taken up residence in her home since her husband’s departure. However, Penelope clings to her belief that Ulysses will soon return. To appease the aggressive suitors, Penelope promises that she would re-marry as soon as she finishes weaving a large tapestry depicting Ulysses’ deeds of bravery. In secret, she’s unraveling the day’s weaving, thus delaying the tapestry’s completion. Penelope knows that her trick won’t work forever. In Troy, Ulysses and his warriors use the Trojan Horse ruse to conquer the city. In his fervor, Ulysses destroys the Trojans’ temple to Neptune, god of the sea, incurring the ire of the witch Cassandra who curses him to suffer the wrath of Neptune. On the return home to Ithaca, Ulysses’ boat shipwrecks and he’s found unconscious on a Phaeacian island beach by beautiful princess Nausicaa. His long, arduous, treacherous and perilous odyssey begins.