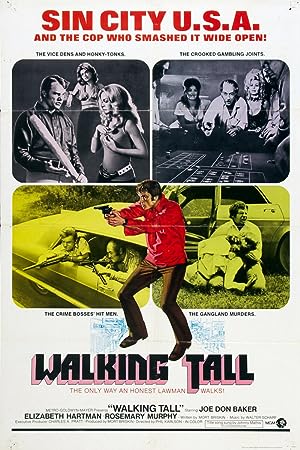 Summary: A surprise hit when it premiered, Walking Tall carried the theme of one man standing up for his sense of right and wrong. Selmer, a small town in southwest Tennessee, served as the authentic background for the bio-pic of the heroic southern Sheriff. Joe Don Baker did an admirable job with the role, and the hugely violent film was a surprise hit. Former Sheriff Pusser himself was set to potray himself in the sequel, but he died in a car crash as he as returning from his contract signing in California. The sequel was filmed using Swedish actor Bo Swensen, and a Final Chapter triquel told of Pussers’ demise. While the Walking Tall franchise will never be on any list of Classic Film, the original is a great slice of Americana, Circa ’70s. It made Bakers’ career and perhaps kicked the ‘southsploutation’ genre of that decade into gear.