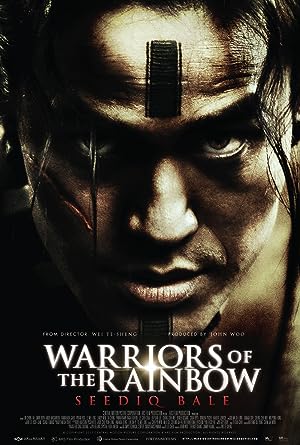 Summary: During the Japanese rule of Taiwan, the Seediq were forced to lose their own culture and give up their faith. Men were subject to harsh labor and kept from traditional hunting; whereas women had to serve the Japanese policemen and their families by doing the household work and giving up their traditional weaving work. Above all, they were forbidden to tattoo their faces. And these tattoos were seen as the Seediq’s traditional belief to transform themselves into Seediq Bale (“true humans”). Mona Rudao, the protagonist, witnessed the repression by the Japanese over a period of 30 years. Sometime between autumn and winter 1930, when the slave labor is at its harshest, a young Seediq couple are married and a joyful party is thrown. At the same time, a newly appointed Japanese policeman goes on his inspection tour to this tribe.

Tags: 1080p2011AtmosBluRayBUMPFraMeSToRLosslessREMUXTrueHDWarriors of the Rainbow