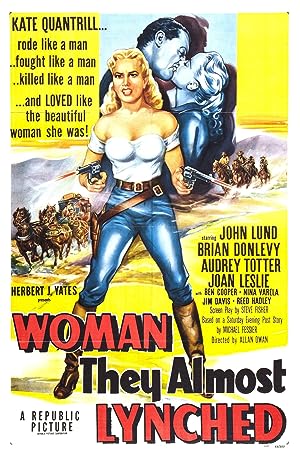 Summary: During the Civil War, Border City is a town laying on the Missouri-Arkansas border at the base of the Ozark mountains.Despite its closeness to the North-South conflict, Border City professes its neutrality and fiercely imposes a 8 mile limit to any belligerent army.Young Sally Maris is arriving into Border City, from the East Coast, on the stagecoach, at the request of her brother who runs a saloon and hotel in town.Uppon approaching Border City, the stagecoach is stopped by a small Union Army patrol and passengers are checked out.The patrol commander offers to escort the stagecoach into town but on the way they are attacked by Quantrill’s Raiders who kill the Union soldiers.The Raiders escort the stagecoach into town themselves.Among the Raiders are the James brothers, Charles Quantrill himself and Kate Quantrill, his wife.The town of Border City dislikes having these Raiders within the city limits and the mayor decides to send for the Union forces in order to rid Border City of the troublesome Quantrill’s Raiders.The problem is the mayor of Border City owns the biggest lead mines in the region and both the Confederacy and the Union want to capture the mines so vital to the armament industry.