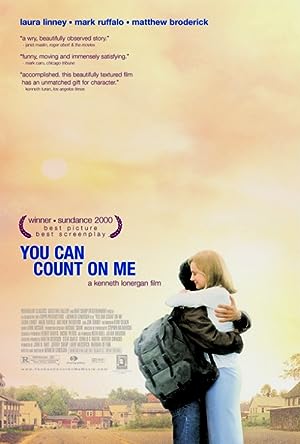 Summary: Adult siblings Sammy Prescott and Terry Prescott have had a special bond with each other since they were kids when their parents were tragically killed in a car accident. That bond is why single mom Sammy, who still lives in the family home in Scottsville, upstate New York with her eight year old son Rudy, is excited to hear that Terry, who she has not seen or heard from in a while, is coming home for a visit. That excitement is dampened slightly upon Terry’s arrival, when she learns that he, broke, is only there to borrow money. As adults, Sammy, who works as a lending officer in the local bank, is seen as the responsible sibling, while unfocused Terry is seen as the irresponsible drifter. Regardless, Sammy welcomes what ends up being Terry’s longer than planned visit if only so that he can help take care of Rudy, who has no adult male figure in his life. Rudy has never known his deadbeat biological father, with whom Sammy wants nothing to do. As Terry – acting as the supposed adult male role model figure – gets to know Rudy, and as Sammy deals with the issues in her life which includes figuring out what her relationship to longtime friend/lover Bob Steegerson means, and how to deal with her straight-laced micro-managing new boss Brian Everett, the maturity level between Sammy and Terry is not as far apart as it appears on the surface.