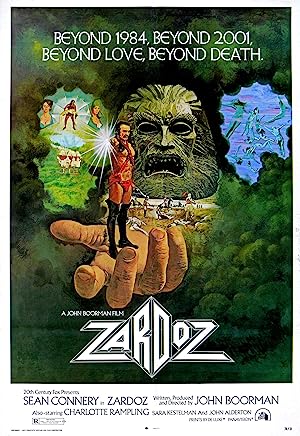 Summary: 2293. Zardoz, an unseen “God” who speaks through an idol – a large stone statue of a head – leads a barbaric race called the Brutals, who live a harsh existence in the Outlands. Zardoz tells the Brutals that once they die, they will be transported to the Vortex, where they will live happily as immortals. He has armed a small group – the Exterminators – with guns, as Zardoz’s philosophy is that killing is good, and procreation is the root of all that is bad. In reality, Zardoz is Arthur Frayn, from a competing more advanced race called the Eternals who live in paradise in the Vortex. The Eternals truly are immortal as they do not age and their bodies undergo reconstruction if they “die”. As such, they truly do not believe in procreation as their society has reached perfect equilibrium. Past human acts such as sex and sleep are obsolete in their advanced state. All major decisions are achieved through pure democracy. The Eternals, however, are not immune to non life threatening disease or sin, the latter which is punishable by aging, only making their life less pleasant but not ever killing them. Arthur’s mission as Zardoz is to control, monitor and study the Brutals for the Eternals. Being in the Outlands, Arthur is isolated without communication back to the Vortex and the Eternals. In his work as an Exterminator, Zed, by accident, is able to find his way to the Vortex as a still alive being. The Eternals vote to keep Zed alive temporarily so that they can study him before they kill him. Among the Eternals who have direct interactions with Zed are: May, the lead scientist, who believes Zed is a blessing in that they have not had access to a Brutal in some time; Friend, a hedonist who wants to use Zed as the animal he considers him to be; and Consuela, the hard lined one who believes in vigilante justice. In the Eternals’ access to Zed, they may learn if he making it to the Vortex was indeed an accident. In addition, their so-called Utopian society may be exposed for what it truly is.